In Fallout 4, there is a lot of talk of legendary weapons. Yes, some legendary weapons are insanely good. On the other hand, armor can be very helpful in tough situations. It does not matter how good your weapon when the enemies can take you with a few hits. These are the legendary armor that you should consider when playing Fallout 4.

You should pay close attention to the armor effects. Some of the effects are stackable and that could really be a boost to your defense. Different armor set for different strategies.

If you’re a sniper, for example, you may not want to melee boosting armor. You want to have the Cunning effect, for example, which raises your agility and perception. As a sniper, you want to be able to move quickly to a different sniping position.

Armor effects may not be as sharp as the weapons abilities in general but most of these armor effect may save you from dying a lot. Weapons are extremely important in Fallout 4 but a solid armor set will enhance it even further. Here are the best armors that could really improve your character.

The sharp armor effect increases your character’s intelligence and charisma stats by one each. If you have multiple armors or power armor pieces with this effect, you can get the effects to stack up for up to an additional six charisma and intelligence points.

While the sharp effect isn’t as useful for combat, it could be very useful for passing speech and charisma checks found throughout the game. Sometimes, one point in charisma can make the difference between success and failure.

It should also be mentioned that the bonus to intelligence ever-so-slightly improves the rate at which you gain experience. It’s not a whole lot but it certainly doesn’t hurt the shop effect appears on the Destroyer helmet sold by Penny in Covenant.

Chameleon effect is unique to normal armor pieces and cannot be applied to power armor. the chameleon effect does not stack and adds a Stealth boy effect making the character invisible while sneaking and specifically not moving.

This would be great for characters with a high agility stat and that is primarily playing a sneak type character. Since you only need one piece of armor with this ability to get the effect.

You could combine it with other legendary effects, specifically the chameleon effect would pair well with the cunning legendary effect as it boosts both agilities with improves your ability to sneak even further.

If you have multiple armors or power Armour pieces with this effect you can get the effects to stack for up to an additional six strength and endurance points. these boosts and strength will improve melee and unarmed damage and are definitely recommended for melee and unarmed based builds.

This is just my opinion though this improvement to melee and unarmed damaged seems kind of marginal to me it is nice if you want to squeeze out every bit of damage from your melee weapons. the fortifying effect appears on a couple of unique armor pieces including the Champion left-arm sold by Lucas Miller. The black ops chest piece sold by dead in Bunker Hill.

Unfortunately, there are no unique power armor pieces that contain this effect that can be found in Fallout 4 at this time.

The cutting effect would go very well with the ultralight build modifications which also boost your action points to your armor pieces. The cutting effect appears on several unique armor pieces including the Mantis left Greave, Wastelanders chest piece, Champion right arm, and the Mark two Synth helmet. All can be purchased from Lucas Miller in Diamond city by Becky Fallon.

In the felons basement in Diamond city and the Institute requisitions officer respectively.

The spreaders effect increases the wearer’s movement speed by 10% for each piece worn and would improve your movement speed by up to 60% by wearing six pieces with the sprinters’ effect. the increased speed is great for quickly moving around and enveloping targets in combat. outside of combat, it allows you to get to places much faster even.

If it looks kind of goofy when viewing yourself run in third-person. This effect would be useful in both regular armor pieces and power armor pieces.

The sprinters’ effect appears on both the Destroyers left leg and the Destroyers right leg and on the Black ops right shin guard. Which are sold by dayz and good neighbor Alexis Combes and Vault 81 and Deb in Bunker Hill.

In my opinion, there is no need for the Piezonucleic armor if you could get some armor pieces with the powered effect. the power effect increases your action point refresh speed in the absence of radiation. It can appear on pretty much all armor pieces not just to power armor exclusively like the Piezonucleic effect.

The power defect does stack and I’d argue this effect can almost substitute for having a high agility stat on nonsneak characters. as it overrides the need for more action points since you can refresh all of your action points extremely quickly.

There are two normal pieces and to power armor pieces that contain the powered effect, the Mark 3 Synth right arm is sold by the Institute requisitions officer. In the Institute while the Commando chest piece, T60 honor left leg and the visionaries T60 helmet are obtained as a part of the brotherhood of steel questline.

The lucky effect adds two points to your luck stat and stacks to up to 12 additional points. with multiple armor pieces provided, you have six armor pieces with the lucky effect. Obviously, this would be great on builds that rely on a high luck stat. It should also be mentioned that the luck stat improves the recharge rate of the critical hit bar.

Six lucky armor pieces boost luck by 12, which makes it possible for up to 22 points with the luck scale level to 10, according to the fallout wiki. 20 to luck recharges the critical meter in three hits.

Now the lucky armor effect is found on the mark forth synth left leg which is sold by a level 4 Workshop merchant. In my opinion, you’re really better off finding a random legendary armor piece at that point.

This legendary effect is exclusive to power armor. as it quadruples the durability of your power armor. I would say more but honestly, it’s pretty self-explanatory this effect works wonders with the fully upgraded X-01 power armor. It is really useful for both you and your companions.

I really like it on companions as their armor pieces tend to break much quicker. Especially, if they are in the line of fire from like Batman launchers missiles explosives or whatever.

Is there any more great armor left out? I know that there is a lot more armor and combinations of effects that would drastically improve your player stats. Do you know some? Let us know more about it. 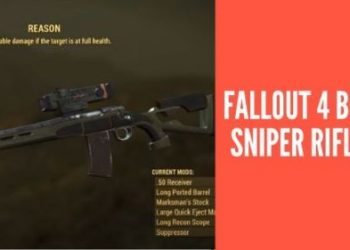