The best way to achieve success in Dragon Age Origins is to have the best weapons. You equip your character with the right accessories to fight off enemies. With so many options, it can be challenging to know which the best is.

Our guide below will give you some excellent options, which you can consider.

Tips on Choosing the Best Weapons

Your characters have a wide array of some of the best weapons. It allows them to inflict maximum damage on their enemies. You also get bonus points on your choice of weapons.

The weapons offer armor penetration. Your characters also have the option of more than one weapon at a time. For the latter, ensure you build upon the duel wielding capabilities.

Some of them come with requirements on the stats, as we will show you below. Let’s check out some of the best weapons you have available.

Melee weapons are some of the best weapon choices. Your main target with melee weapons is rogue builds and warriors. You want to give the maximum strength attack of the enemy. Some of the two-handed options available include battle access, Greatswords, and mauls.

One-handed options include daggers, war axes, longswords, and maces. The latter gives you low damage, but with high dexterity. You want to focus on damage as your primary stat. Your weapon should be able to do maximum damage with the hit.

The Maul is a powerful weapon that can be used to smash through armor with ease. Unlike other common weapons, the bonus damage stat on this weapon makes it as powerful and desirable as a two-handed sword. This is because among its stats are excellent armor penetration with a strength modifier that makes it top-notch for any warrior of level 13 or higher to have in their inventory when they’re questing through dangerous territory like bandit camps.

This maul is a lethal weapon that can only be purchased in the Denerim Market District. The wielder of this maul needs to have completed three main quests after Lothering, with Gorim being your vendor.

The Chasind Great Maul offers some perks many people are looking for: both good for ranged attack (from afar) as well as melee distance attacks (up close). It does just about everything well which makes it hard to replace as you level up.

Ageless is a powerful and sought-after treasure in the world of Dragon Age: Inquisition. To obtain it, one must slay the dragon that appears when three pressure plates are activated simultaneously by standing on them while inspecting an ancient throne located deep within Orzammar’s Royal Palace.

However, completion of this quest can only be achieved before completing A Paragon of Her Kind quest; for any player to activate these pressure plates after choosing their new king would destroy said monarch with an onslaught from every direction at once!

The foot-long blade of this sword is made out of steel and will serve a templar well on the battlefield. The hilt has been wrapped with leather, which makes holding it comfortable for even long periods of fighting in heated combat. It was commissioned by the Chantry to be used by its templars as recognition for completing all three quests given from the Chanter’s Board in Lothering.

This is an item for the courageous hero who fought Branka and her minions, defeating them in battle. This heroic collector was brave enough to fight Branka after she sided with Caridin at the end of A Paragon of Her Kind quest! This mighty sword is his prize from that epic battle.

This ring is looted from Branka if you sided with Caridin at the end of the A Paragon of Her Kind quest. It boosts fire and earth damage by 15%.

You get all the benefits of the melee weapons together with an aim time and range stat.

While the Far Song Longbow has been stranded in the back of a dusty shop for decades, it still sings with mysterious power. But its history is long when varied – it almost hums with mystery. Sadly, the tale has been lost to time’s ravages – but you can still take up your own adventure on an epic quest if you’re feeling brave enough!

If a Warden abandons the village of Redcliffe during “A Village Under Siege” and kills its blacksmith Owen or tells him bad news about their quest (e.g., after speaking with Connor in Lost in Castle), then they will be able to purchase an item called Far Song from a new Blacksmith that appears at this point; however, even if one brings good news back to Owen’s apprentice he won’t appear until you revisit the town.

The Imperial Crossbow is without a doubt the best in the game. You can find it early on before Lothering gets overrun by darkspawn! Find the merchant who overcharges and then pickpocket him after you run off some pesky sisters nearby.

The Imperial Crossbow is a powerful weapon for any player, which can be obtained from the merchant in Lothering. To steal it from the merchant, one must first approach him and initiate a conversation with these words: “What are you selling?” The Warden will then have to choose between running off angry villagers or persuade the merchant not to leave town.

Do you know when you’re playing Dragon Age and have just enough money to afford the staff your character has been eyeing? Well, now there’s a way for all of us who can’t get it. The best part is that this new item doesn’t need any special skills or experience points; anyone with some gold can buy it from Tranquil Proprietor at Wonders of Thedas!

The lyrium runes seem to glow, and it emits a sound reminiscent of wind blowing through the boughs of trees.

Wrath of Heaven is a powerful ability that spares no one in its path. It deals damage to demons and stuns nearby foes; embracing the Light modification increases its duration while Breath of Light heals you for every enemy Wrath of Heaven strikes. Etched into this staff’s length are stars from all overnight sky – it serves as a map through which we can follow our own celestial journey back home again!

The choice of weapon will depend on the situation. Consider the following when picking:-

Mauls are great for high attribute modifiers and armor penetration. Some examples include:

Spears are great for speed and medium-to-high critical chance. Some options to consider include:-

Longbows give 50/50 dexterity and strength. Crossbows equip you with 100-percent dexterity.

Armors give your character protection, and the rating will determine the amount of damage every time a blow lands. Aim for higher ratings so that you suffer less damage.

Fatigue rating will increase or decrease depending on the skill levels. Opt for lower modifiers so that your character can use their skills a bit more. Higher ratings mean higher fatigue modifiers.

Other Accessories to Consider

You get tons of benefits from accessories such as a Ring of Ages, life-giver, Andruil’s Blessing, and the Spellward.

We have explored some of the best weapon choices in Dragon Age Origins. Pay attention to the crafting material for maximum strength and the highest DPS. Incorporate factors such as grips and runes to add to the power of the weapons. 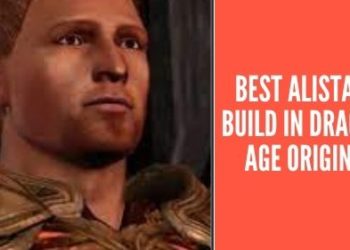