Dragon Age Inquisition continues to stand out due to its ability to engage players so actively. This could largely be attributable to the characters that walk through the journey with you. With each having such unique attributes and benefits, it can be difficult to know which the best companions are. Our article below gives you our top picks.

Dorian is a Tevinter Mage whose moral fortitude adds to the power he already has. He left a wealthy background to become an agent of change in a world that was quickly losing its grasp on what was important.

He sees the good in people and is an excellent companion at all times. To recruit him into your team, you need to defeat the master of mages at the Hinterlands.

What we like – dependable and the voice of reason

Solas is that odd friend that you find yourself turning to every time. You meet this charming elf mage early on in the game, and can’t help but admire how strongly and proudly he stands by his lineage.

He also has a thirst for knowledge and understanding and ends up being the voice of reason that you can count on. In combat, you can count on him to use magic, whether in ice or spirit form to help fight your enemies.

Reliable, tough, and trustworthy are just some of the ways you can describe the human warrior Cassandra. You meet her at the very beginning of Dragon Age. She is on a path of trying to find out what series of events led to losing her life.

Over time, her character starts to develop as she stands by you through the hardest battles. She brings perspective and conviction into the meaning of friendship and a helping hand when you need it.

Sera is that friend you know will always tell you the truth. She is an elven rogue who is outspoken, yet funny and never seems to take any situation seriously. You may not initially like her, but the more you take time to know her, the more you start to see her good qualities. You can enlist her when you make your first visit to Vek Royeaux.

She can be difficult and hard to please, but in battle, she is fast, a master archer, and has some special abilities that you can use in your favor. Who wouldn’t want that in their team when the going gets tough?

Iron Bull is a descendant of the Qunanri, and a warrior. He is a party animal and makes no apologies for his character. To get him to be a companion, you will receive a special quest for his recruitment at the Storm Coast.

He is a true embodiment of masculinity and does not shy away from aggressive situations. You will quickly learn to depend on him due to his wisdom. He is also a worthy companion in the battlefield, making him a top contender for best companions in Iron Age Inquisition.

The Mabari hound is the exemplification of why dogs command the title ‘man’s best friend.’ He will follow you through your journey, and is an invaluable companion when you are in some tough situations. Surely one of the best companions you could hope for.

Avelin is a human warrior who is very kind and places friendship and family above all else. She is a protector of the weak, and may occasionally overlook what is lawful or right to help out a friend in need. However, it does not mean that she will not lecture you about your wayward ways when she needs to.

Another sure contender for the best companions spot is Varrick. He is easy-going, and it is really hard to find fault with him. He is that loyal friend who stays with you until the very end. As a successful businessman who is well educated, he is a voice of reason, and can get you out of dicey situations.

You will enjoy the conversations he has with his companions. You can also depend on him during a battle to bring out his trusty crossbow, Bianca, when the need arises.

The Elvin mage is adorable and a great character to explore. She struggles with feelings of isolation and has a fascination with black magic. What makes her so endearing is that; she is an embodiment of the insecurities and confusion that many people face in life. It makes it easy to connect with her when you understand it from that point.

The former slave Fenris is a potent companion in battle. He can phase through physical objects due to an experiment` conducted on him when he was much younger. It makes him an invaluable tool when in combat. You may get the feeling that he is a bit standoffish, but perhaps that adds to his appeal.

Morrigan also goes by the name, The Witch of the Wilds. She has shape-shifting abilities, and is, therefore, a potent mage. She can be scathing and may come across as arrogant due to how highly she holds herself.

Put that aside, and you will get someone with a lot of knowledge and depth. Talking to her makes for interesting conversation, and she is definitely someone you will enjoy during the journey. 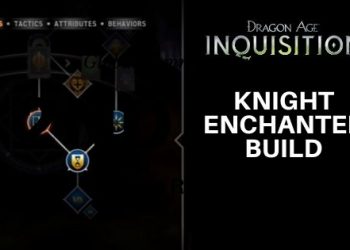